Self Care strengthens your connection to your inner wisdom.

Access your true power instead of forcing yourself to power through challenges, obstacles, and sometimes people. Take care of others while maintaining healthy boundaries so you can show up in your full energy and power.

Self care is not selfish - it’s your responsibility.

Posts and podcasts in the Self Care Channel focus on “enlightened selfishness” in the form of correct care of yourself first. 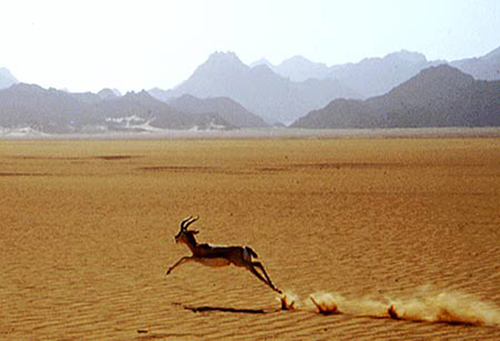 I think non-runners believe that runners were born to run and they were not.  If that is your belief, then like everything else in life, you are absolutely right! On the other hand, if you are willing to enjoy the process of becoming a runner there are many rewards.

When a non-runner envision someone they believe was “born to run”, it’s a gazelle-like creature leaping effortlessly through a pasture, complete with rays of sunshine and beautiful butterflies.

I know this, because for most of my life, that’s exactly what I thought when I watched other people running.  I had always found running to be an alienating and disappointing experience and it took a near break-down at the side of the road one day to get the help and education I needed to break through my barriers to running.

I’ll admit that if my husband Tony wasn’t an avid runner, I’d probably be getting my exercise in another way.  When we decided to get married, we made a commitment to each other that we will have a healthy, active lifestyle together.  Do we always want to get up and out, especially in the winter months?  Absolutely NOT.  But we do it because of our commitment to each other and the numerous health and lifestyle benefits we experience.

Here are some of the reasons that I run:

Things I wish I knew in advance:

I’m currently training for the Vancouver Half Marathon on Sunday, May 5th.  To tell you the truth, my training has been somewhat lackluster and inconsistent due to unexpected demands on my time in January and February.   I’m at the point now that I know I need to stretch more, eat better, see my support team and not miss a training session between now and race day.  In a way, that is what I’m doing by sharing this with you.

If you are even thinking about trying something new, whether it’s running or another form of regular exercise, I’ll leave you with two thoughts:

1.  Even if you are awkward, uncomfortable or self-conscious, the whole point is to get your body moving.

2.  Regardless of outward appearances, you can always choose to see yourself as a gazelle. 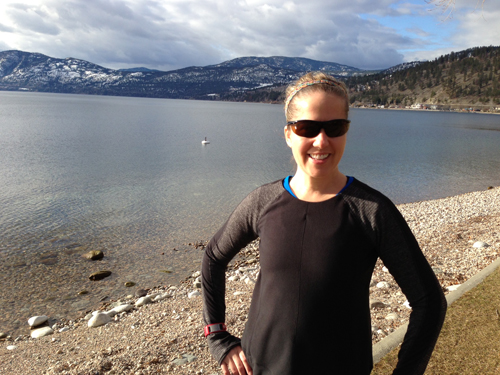 We were blessed with beautiful weather today in the Okanagan Valley.  This year, like most years, I’ve had enough of winter by now and every little bit of sunshine makes a big difference.  Since I am training for the Vancouver Half Marathon on May 5th, Sundays are for running.  The Sunday run is the long run of the week, known as LSD (long, slow, distance for those of you who were thinking of hallucinogenic substances).  Today, like most Sundays this winter, began with several presses of the snooze button and a tiny pity party because I would have preferred to sleep in.

The Sunday ritual usually consists of heading down to Peachland with my husband Tony and our dog (ok, my dog) Brandy.  Tony’s training for a full marathon, so he gets started while I do the first 2k with Brandy, whose nick-name is “Poops-a-lot”.  After much starting and stopping, I am always happy to put her back into the car so I can hit my own stride and experience the benefits of a solitary LSD run.

Today was a little different.  There was a small 5k race at the Peachland waterfront.  It was enough to keep my mind from wandering out of body as I observed and engaged with several of the racers, who were running towards me.  Every race has it’s Serious Leaders, and today’s race was no different.  The serious leader will make no eye contact with any one.  He or she is in the zone, with singular focus and their goal in mind.  Legs and heart pounding, lungs heaving, and eyes bulging, these runners mean business.  They are working hard and hopefully will celebrate with equal intensity at the finish line.

The middle of the pack was filled with presumably newer runners, putting in at least as much effort as the aforementioned Serious Leader.  With much effort, I graduated to the rank of Middle of the Pack last year.  There are good days and bad days, but increasingly the good days are outnumbering the bad days.  It’s highly unlikely that I’ll ever be out in front, but the rewards of good health, great cardiovascular endurance and permission to eat make the effort worthwhile.  The real trick to getting to and staying with the middle of the pack for me has been literally an exercise in patience.  I’ve had to exercise patience with my body while it adapted to new levels of physical activity and healed from injury.  I’ve had to exercise patience with my attitude, which wasn’t always positive, especially in the beginning, and still can get a little ugly on a really tough running day when I’m not fueled properly.

The runners I enjoyed watching the most today were the runners that were really struggling.  You know what I mean – huffing and puffing, frothing at the mouth, eyes rolled back, uneven stride.  You know that whatever their time, these people are going for a personal best.  These are the runners I celebrate.   I’ve been there, and if a random stranger cheered me on, it gave me a boost of energy.  Today they needed all the help they could get, because the path was also full of walkers, many of whom function as moving obstacles and peanut gallery.

I was on my second lap of the waterfront and I thought all the racers were gone when I saw her.  The Last Runner.  My heart was about to go out to her, but then I noticed her radiant smile.  She was having a break-through and she knew it.  Was this her first 5k ever?  Was she on her way back from an injury?  I don’t know, but I do know that she was HAPPY.  This radiant Last Runner has no idea, but she made my day.   If there is a moral to the story, it’s this:  No matter what your goal, challenge or race, it doesn’t have to be fast, pretty or graceful to be good for you and the source of inspiration for someone else.  Just get out there and get moving! 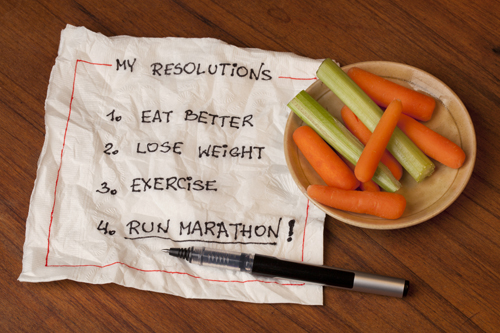 This is an article I wrote for the first edition of Okanagan Health and Wellness Magazine.

Many people ride what I call the Resolution Rollercoaster, an annual cycle of good intentions and a burst of energy followed by a low period of frustration and disappointment. Make 2013 the year you break this cycle.  Here are a few pointers for sustainable, rewarding results.

1.  What is your Dream?  It is important to have a vision of yourself living your dream goal.  What will your life be like?  How will you feel?  What will achieving this goal allow you to do that you can’t do now?  Start with the end in mind an write it down.  When old habits creep in, you will need your vision of your reward to pull you through.

2.  Set smaller, achievable goals.  Smaller goals serve as signposts of success on your journey to living your Dream.  CELEBRATE all your successes, big and small.  Feel good about what your are doing for yourself.

3.  Invest in your outcome.  It’s important for you to “get some skin in the game”.  Whether it’s an investment of time, money or both, investing in your goals accomplishes two things.  First, it communicates that you and your dream are worth it.  Second, it’s much harder to say “no” to getting out the door or taking action when you are invested.

4.  Share your goal with others.  By telling friends and family what you intend to do, you turn them in to accountability partners.  If they doubt you, or think you are crazy, it doesn’t matter.  Remember, this is about YOU, not them.

5.  Be kind to yourself.  If there is a large gap between where you are today and your dream goal, recognize it’s going to take some time.  The best rewards do not come from instant gratification, but consistent action towards your goals and dreams.  If you have a moment of weakness, forgive yourself and get back in the game.  Don’t waste any time or energy beating up on yourself.  The only way to win is to stay in the game and play.

For more information about how to receive your FREE subscription to this popular new  magazine, go to www.ohwmagazine.com or find them at www.facebook.com/OkanaganHealthWellnessMagazine