There’s been a few changes since the last Pictures + Words. The most notable in the context of this story is my decision to upgrade my ten year old digital SLR camera to a mirrorless camera. For non photography buffs, the significance of this change is my equipment is lighter and smaller. Just like when 35mm cameras (arguably) caught up with their larger format predecessors, the technology has (arguably) caught up in a new range the smaller mirrorless cameras.

As if a ten year leap forward in technology wouldn’t be enough change, I also changed camera lines. It almost killed me to sell my trademark white Canon zoom lenses. I was attached to their enviable quality, and they’ve been with me everywhere for the past couple of decades. For a last time, I cradled them like babies before I releasing them to the wilderness of Facebook Marketplace.

I bought my very first camera – a Fuji FZ 3000 Zoom – in 1991 when I was in between my Psychology degree at University of Toronto and my Education degree at York University. I paid for it with tips from a lucrative summer tending bar at the first rooftop patio at Studebakers in Toronto, the iconic 60s theme bar on Pearl Street. Even though I was on track to become a teacher, photography was bubbling to the surface as a significant driver in my life even then.

Smooth at all its edges and held horizontally like a pair of binoculars, The FZ-3000 stood out from the crowd. I would be stopped everywhere I carried it by strangers wanting to know about my strange contraption. Because of its shape and the size it needed to be to accommodate an exceptional zoom lens, they were usually disappointed to find out it was “just a photo camera” and not the latest evolution of a video camera. Photo buffs, on the other hand, would salivate and gaze at the lens with misty eyes.

My present choice for a new camera was in part a nostalgic return to Fuji, now rebranded as Fujifilm. In an ironic twist, my new Fujifilm XT4 is an eye-catcher in its own right, but not for its futurist design. Externally, it’s a throwback, designed to look like the beautiful cameras of the 1960s. This was attractive to me. Its reminds me of the 1964 Minolta camera my father chased us around with as children.

A decision of this significance can’t be just about looks, so I balanced my attraction to the XT4’s aesthetics by watching and reading every review available on the internet. I’m sure I would have waited for a silver model if supply hadn’t been limited because – never mind, I’m not going us the P word today.

For the past couple of months, I have been learning how to use a radically different camera than the ones I could operate in my sleep for the past decade. Even on manual, I still trip up! The dials are in different locations and I swear the zoom turns in the opposite direction. Rewiring my brain to compose and shoot quickly is taking a while, but it’s coming along, and it’s a joyful process.

This brings me to the bee just bee-ing. Having been locked down for most of the past year and a half, a lot of my creative energy has been directed towards our garden. Last year we tore out old overgrown shrubs and replaced them with grasses and lavender, favourites from my gardens in Kelowna. This year has been more about enjoyment and using it to escape my desk in my home office.

This past weekend, I was wrote at the back yard table. Taking time in between thoughts to be still, I watched the grasses and lavender move in an almost nonexistent breeze. A honey bee moved between the swaying purple blooms. I felt a familiar nudge to get my camera.

I shot slowly and deliberately, fumbling with the dials a little less than the last time. The bee is a different subject for me. I’m more of a mountain girl, accustomed to shooting things that don’t move unpredictably. I threw the lens wide open to let as much light in as possible and held my breath.I hoped the bee would stick around and that my shutter speed was fast enough to freeze it in time and space.

The bee wasn’t going anywhere. It had exactly what it needed in each tiny bloom and although it was exerting effort, the bee wasn’t struggling in its work. It was doing what comes naturally. The bee just bee-ing reassured me. Ease with my current camera will return with practice and persistence. And maybe I don’t need to miss my lens babies after all. Fuji still makes wicked cameras and eye-popping lenses. 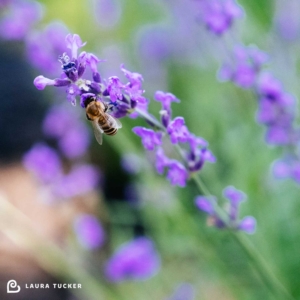 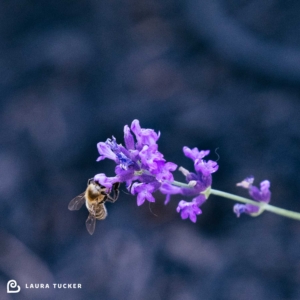 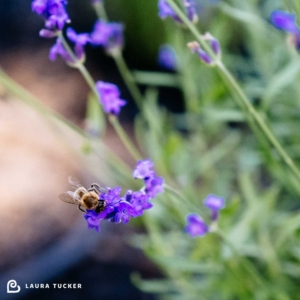 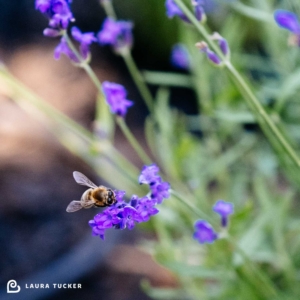 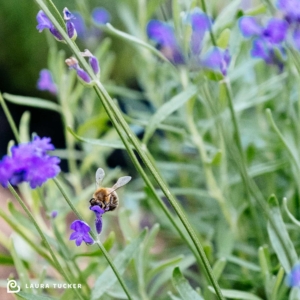 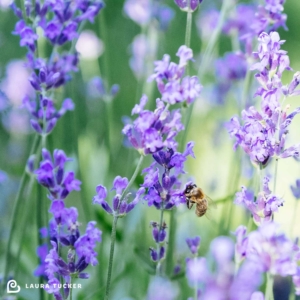