You are here: Home / Creativity / The Zion Subway – Lessons From A Trip Outside The Comfort Zone

We were at a crossroads in The Subway.  We could either try to climb out without the trail, or stay within our comfort zone and re-trace our steps.  I was not comforted by either option…

Memories of a day I took a journey outside my comfort zone washed over me while I scrolled through my Instagram feed.  A friend had shared a photo from his recent trip to Utah.  I was transported by the memory of the day I hiked The Subway in the back country of Zion National Park with my friend Beth.

The Subway is a canyon that requires an advance wilderness permit.  I had never heard or seen anything about it until a print on display in the lobby of the Zion Park Lodge had me all agog.  Upon learning that they gave out any unreserved passes the afternoon before, Beth and I canceled another hike and lined up at the appointed time.  We were among six people who were granted passes for the next day.

While not exceptionally technical, it’s a long hike, especially when loaded up, or should I say down, with photography equipment.  The few images I had seen gave few clues as to the size or scale of the Subway, so I packed every combination of lens.  They were definitely long exposure, so my tripod hung from my overstuffed knapsack.  With the weight of the equipment and repeated stops to photograph the canyon, it took us much longer to reach our destination than anticipated.

Our destination was the dramatic lower Subway, a short section of the canyon where the walls come so close together that over the millennia water from flash floods and spring runoff from the north has carved an oval shaped tube in the stone.  The light from the mid-day sun enters the narrow canyon at the top.  The light refracting on the curved walls of the tube creates an other-worldly effect.

Before getting in to our creative zone, we had to assess our remaining hours, lest we get carried away and lose track of time.  Our hike in had taken almost two hours longer than we had anticipated.  Calculating backwards from the October sunset, we were forced to acknowledge that we’d have no longer than half an hour before we would have to retrace our steps.

I worked as quickly as I could with my film and digital cameras.  As so little sunlight penetrates that deeply into the canyon, it was unexpectedly cold.  My hands and feet moved slowly.  I implored the photo gods that the results would be worth the effort.  After the half hour had passed, I reluctantly packed up my bag and walked out of the relative darkness into the remains of the day.

It was on the way out of the canyon that things started to go sideways.  With the light diminishing faster than anticipated, my friend and I missed a turn while ascending the canyon wall.  We didn’t realize we were lost until we were staring at a nearly sheer incline sprinkled with occasional tree roots and protruding rocks.  This was not the path we were looking for.

We were at a crossroads.  We could either try to climb out without the trail, or stay within our comfort zone and re-trace our steps.  I was not comforted by either option.

We were ten hours into our hike.  My body was throbbing from head to toe with exhaustion. Dust permeated my clothes and hair.  I could feel it in my eyes and between my teeth.  All I wanted was to put down my pack and rest, but there was no time.  Without the sunlight to guide us, we would be trapped overnight in a canyon without supplies, and an abundance of coyotes, scorpions and snakes.   The fear was real.  I began a stream of consciousness laden with expletives followed by a stream of tears.

Fortunately Beth had more experience and patience in that moment than me.  As much as I wanted to power through and get it over with by sticking to our current route, I conceded that a counter intuitive retreat was likely to bring a much better result.  With reluctance, I slid down the canyon on my butt, picking up more sand in the process.  I was embarrassed by my emotional display, but took some consolation that my eyes had been flushed clean by the downpour.

We eventually found the trail and finished the last half mile running.  My oversized pack pounded me from behind and my eyes felt like they were rolling back into my head.  The sight of our rental car was enough to bring on another round of tears.  This time the tears flowed with relief and gratitude.

As depleted as I was, the first thing I did when I got back to my hotel room wasn’t take a hot shower or find food.  I popped my camera’s memory card into its reader, and took a first look at the spoils of the day. 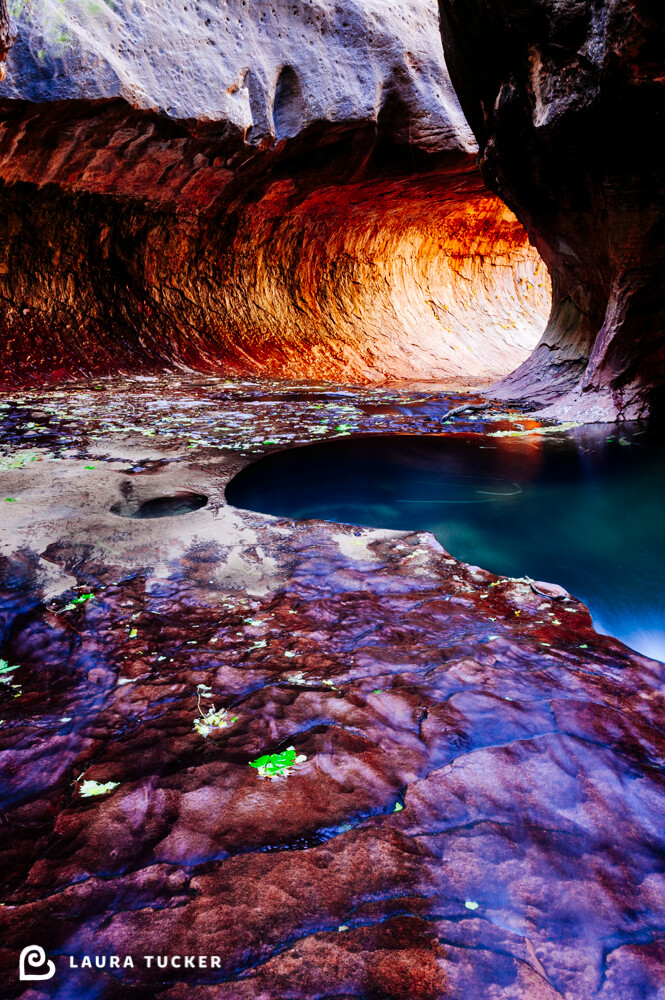 My day in The Subway is now a fond memory, interlaced with lessons that extend to every day life:

Lost in the memory while perusing Instagram, I felt the call of the desert and deep gratitude for what my creative outlet has taught me about life.