You are here: Home / Conscious Leadership / What Do You Mean I Don’t Want to Be Known as “New Age”?

I finally have an answer for when someone says to me, “You don’t want to be known as ‘New Age’. People will think you are flaky.”

It wasn’t the first time someone had said those word to me, and I doubt it will be the last.  After breathing slowly for a moment, I realized that this time, it wasn’t coming from judgment, but from genuine concern.

I understand the concern.  We New Agers are partly responsible for our own bad rap. Inaction and not knowing what to do with our beliefs – usually because of needing to uncover layers and lifetimes of trauma – has created the impression that to be “new age-y” means lack of meaningful results, which equates to “flaky.” But being flaky and being paralyzed by not knowing how to proceed are two different things.⠀
⠀
When I think of New Agers, I think of people who were tuned in to climate change 30 plus years ago, like David Suzuki. Or Albert Einstein, who was able and willing to look at things other people couldn’t see. Or the dozens, if not hundreds of intensely conscious human beings I know who are actively engaged in healing – themselves, others around them, and by extension, the planet. It’s all the same stuff.⠀
⠀
Granted, new age spirituality has proven difficult terrain to navigate. Universe knows, I’ve lived the cautionary tale. It’s no wonder people misconstrue well-intentioned, authentic consciousness raising with snake oil and the equivalent of the 1970s ouija board craze. (No disrespect to the ouija board.)

The New Age has become the mainstream

The New Age has become the mainstream – and not just when it comes to spirituality. It’s becoming mainstream in science, technology, wellness and business. It’s become the mainstream with the wave of compassion and action in response to the crisis of leadership confronting us all.⠀
⠀
Do not make the mistake of thinking that the new age thought and lifestyle cannot coexist with common sense, intelligence, strategy, discernment, success and rational thought.⠀
⠀
Hiding in the new age spiritual closet has not been a winning strategy for me. I’m out. I’m proud. I’m free. And I’m the opposite of flaky. 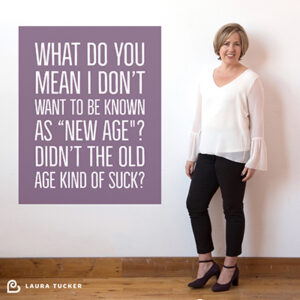